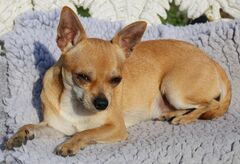 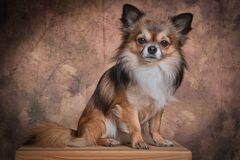 The chihuahua is a tiny dog with a huge personality and an even longer history, one of which pre-dates Columbus himself. It's one of the few remaining breeds that is a legitimate descendant of the pre- contact dogs of the native Americans. Today the chihuahua is more famously known for its striking attritubes - being the smallest breed in the world with an attitude larger than that of many big Dog breeds. Its small and convenient size has made it very popular as you can easily fit the dog inside different purses and bags.

Looks and characteristics:
With a rounded "applehead", full and erect ears and large radiant eyes they make for cute and small companion dogs. They are a short muzzled breed and is available in both short haired fur and long haired fur

Colors:
The coat colors for a Chihuahua has a large range as it include varieties of black, brown, cream, red and silver.

Their markings can differ from splashed to solid, allowing for an array of different colors and patterns within the breed.

History and origins:
The exact origin of the Chihuahua is shrouded in mystery as many paintings and remains of chihuahua - esque dogs have been found in Egypt and Malta, but what is confirmed is the dogs connection to the pre - contact pooches of the New World.

The country of origin is Mexico and the dog breed is named after a state called Chihuahua. Most likely the Chihuahua is the descendant of Techichi, a larger and heavier version of its modern successor. The Aztecs are considered the ones to refined the breed into smaller and lighter dogs, after conquering and stealing the breed from the Toltecs. The Techichu came to be integral to Aztec culture and was even considered one of "Montezuma’s fabled treasures".

Fortunally, after the colonisation of America, the breed lived on in distant villages. It wasn't until the 1800s the breed gained attention and the first ACK registration didn't happen until 1908.

Temparement:
This compact and confident dog is a loyal companion - not afraid to alarm and try to protect its treasured family. As with many small dogs they are susceptible to small dog syndrome, meaning - an aggressive, cocky, bossy demeanor. It is why they say they have a "big dogs attitude" and why many people despise this breed of dog.

The behavior of a dog is influenced by many factors and it is important to consider why this happens. There are plenty of Chihuahuas who are well behaved. Being small makes you vulnerable and when many Chihuahuas aren't respected and treated as dogs they resort to this kind of behaviour. How you raise the pup from start and what set of rules and boundaries you establish will also affect your dog's manners