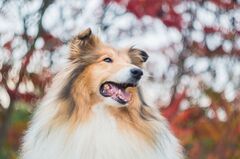 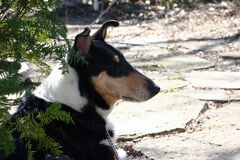 Fanously known for appearing in the TV shows and movies Lassie, based on the popular pop culture novel of Eric Knight, the Collie became a popular breed and found itself in the heart of many young children. It is still a popular breed today but not as poplar as it used to be in the 60s. With a friendly personality, great responsiveness and a stunning appearence, it is not weird that the breed has gained a lot of recognition.

Looks and characteristics:
There are 2 types of collies; rough collie (the most famously known with its long fur) and smooth collie (a variant with short fur.) The only difference is the lenght of their fur.

Standing anywhere between 22 to 26 inches tall, these medium-large dogs radiates beauty, elegance, dignity and physical harmony. Their faces gives an impression of gentleness and dreamyness. They have very light heads in comparison to their bodies, with a smooth transition from the ears to nose with a well rounded muzzle. Their ears are normally erected with an ever so slightly fold at the tip, known as semi-prick or tipped. Though not all ears fold correctly it is desireable and many people tape their ears as puppy to encourage the fold to lie properly.

Collies have a very distinct gait, decribed as agile and powerful without any inelegance. Their trot is aliken to that of a fox.

The Collie breed's exact origin are unknown but it is believed that they are descendants from herding dogs brought by the Romans during their conquest of Britain, around the year 43 AD. Over the thousands years to come the dogs were interbred with local dogs and eventually became the breed we know today. The first written litterature mentioning the Collie dates back to the 1900th centuary.

The breed was popularized by Queen Victoria who had a fondness of it's glaring beauty which contributed in perfecting the breed for show purposes.

The Collie has a friendly mindset and is easily trained, with a good responsiveness and a willingness to work. It normally doesn't have a noticeable prey drive and gets along fine with other animals.

Eye normalities is reacurring in the breed and some Collies might have a sensitivity to drugs.

The recommended health tests from the national breed club are: